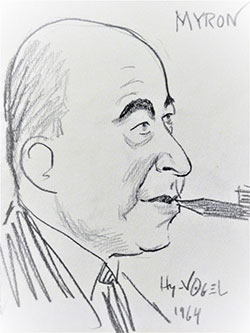 Myron Winegarden was a lifetime resident of Flint, Michigan and the founder of our law firm. He earned his undergraduate degree from the University of Michigan College of Literature, Science, and the Arts, and then graduated from the University of Michigan Law School in 1929. Shortly thereafter, he returned to Flint to set up his law practice. Winegarden initially practiced on his own and then as an Assistant Prosecuting Attorney. He subsequently returned to private practice and shared office space with other attorneys, including Herbert Booth, which associations founded the firm.

The law firm of Winegarden, Haley, Lindholm, Tucker & Himelhoch, PLC continued to flourish and moved to its current, Grand Blanc, Michigan location in January 2002. True to its roots, firm clients receive premium legal counseling and services by skilled and approachable practitioners who are visible and active leaders in the community. Winegarden, Haley, Lindholm, Tucker & Himelhoch, PLC still handles the vast array of legal issues presented by institutions and businesses of all sizes and locations (throughout Michigan and the United States), their owners, management, and personnel. The firm also caters to individuals whose problems run the gamut from tax and bankruptcy issues, to real estate and construction dilemmas, and from probate and estate concerns, to employment, and selective personal injury, criminal and divorce matters.

We will respond to your inquiry in a timely fashion. Thank you.